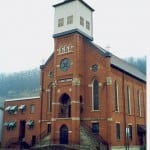 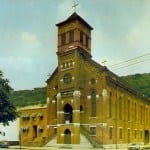 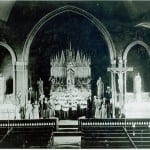 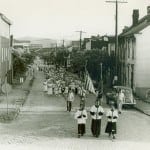 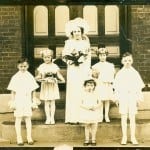 The history of the faithful in Benwood goes back to 1868 when circuit riding priests from Wheeling would visit Catholic families in the area, with St. John Parish being founded in 1875. Drawn to the area by opportunities in the steel and coal industries, the families that initially made up the parish were comprised of at least fifteen different ethnic groups, including Croatian, Slovak, Hungarian, Italian, Irish and Austrian – a true melting pot representative of so many West Virginia communities.

The victim of numerous floods, the earliest church building was irreparably damaged in 1884 and the present structure, the oldest still in use in the city of Benwood, was erected between 1891 and 1892. In response to the significant flooding experienced in Benwood, the sanctuary was elevated to the second floor of the church, becoming a safe haven for parishioners and Benwood residents during some of the most significant flooding the area has seen.

In 1910, a cyclone hit the city of Benwood causing widespread damage—including damage to the newly constructed St. John’s. The roof and steeple of the parish were severely damaged, necessitating the removal of the large spire above the steeple some years later.

On April 28, 1924, one of the largest coal mine explosions in West Virginia history occurred at the Benwood mine. Many of the more than 100 men killed were members of St. John Parish. Father Schoenen, pastor of St. John’s at that time, was forced to conduct mass funerals.

Through floods, wind, fire and explosions, St. John Parish has served the faithful of the city of Benwood for more than 140 years. Thousands of baptisms, first Communions, confirmations, marriages and funerals have occurred within the parish. More than a dozen members of the parish were called to vocation and service to the Catholic Church. St. John’s truly exemplifies the community, determination and above all, faith, of our Diocese of Wheeling-Charleston.